How is Docker different from a normal virtual machine?

In order to know how it is different from other virtualizations, let's go through virtualization and its types. Then, it would be easier to understand what's the difference there.

In its conceived form, it was considered a method of logically dividing mainframes to allow multiple applications to run simultaneously. However, the scenario drastically changed when companies and open source communities were able to provide a method of handling the privileged instructions in one way or another and allow for multiple operating systems to be run simultaneously on a single x86 based system.

The rapid development of virtualization technologies, primarily in cloud, has driven the use of virtualization further by allowing multiple virtual servers to be created on a single physical server with the help of hypervisors, such as Xen, VMware Player, KVM, etc., and incorporation of hardware support in commodity processors, such as Intel VT and AMD-V.

Emulation, also known as full virtualization runs the virtual machine OS kernel entirely in software. The hypervisor used in this type is known as Type 2 hypervisor. It is installed on the top of host operating system which is responsible for translating guest OS kernel code to software instructions. The translation is done entirely in software and requires no hardware involvement. Emulation makes it possible to run any non-modified operating system that supports the environment being emulated. The downside of this type of virtualization is additional system resource overhead that leads to decrease in performance compared to other types of virtualizations. 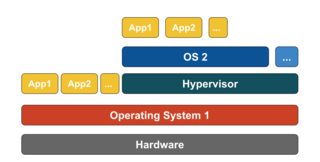 Paravirtualization, also known as Type 1 hypervisor, runs directly on the hardware, or “bare-metal”, and provides virtualization services directly to the virtual machines running on it. It helps the operating system, the virtualized hardware, and the real hardware to collaborate to achieve optimal performance. These hypervisors typically have a rather small footprint and do not, themselves, require extensive resources.

Examples in this category include Xen, KVM, etc. 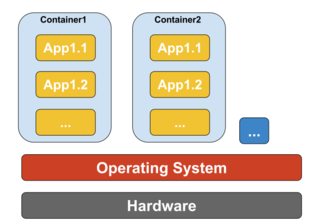 The concept of a container is made possible by the namespaces feature added to Linux kernel version 2.6.24. The container adds its ID to every process and adding new access control checks to every system call. It is accessed by the clone() system call that allows creating separate instances of previously-global namespaces.

The Linux Control Groups (cgroups) subsystem, next major component to enable container-based virtualization, is used to group processes and manage their aggregate resource consumption. It is commonly used to limit memory and CPU consumption of containers. Since a containerized Linux system has only one kernel and the kernel has full visibility into the containers, there is only one level of resource allocation and scheduling.

Unlike a virtual machine, a container does not need to boot the operating system kernel, so containers can be created in less than a second. This feature makes container-based virtualization unique and desirable than other virtualization approaches.

Container states (Docker or LXC images) are small in size compared to virtual machine images, so container images are easy to distribute.

Resource management in containers is achieved through cgroups. Cgroups does not allow containers to consume more resources than allocated to them. However, as of now, all resources of host machine are visible in virtual machines, but can't be used. This can be realized by running top or htop on containers and host machine at the same time. The output across all environments will look similar.


REFERENCE / CREDIT : Original author of this post is Ashish Bista , on StackOverflow